When you book with an account, you will be able to track your payment status, track the confirmation and you can also rate the tour after you finished the tour.
Sign Up
4646

Our women only tour is one of our most popular tours at Andalucian Routes. Due to our first-hand experience of working with Muslim travellers for over 17 years we have understood that over the years the way that Muslims travel has changed dramatically. We have seen a huge increase in Muslim women who want to travel around the world but don’t necessarily have travel partners or who want to travel by themselves as part of a journey of self-discovery. We therefore designed this tour for those solo female travellers who want to see the world and explore and also meet new people and make friends along the way. We find that when women travel on our women only tours they meet people who become their travel partners for many other destinations.

During the Women’s only tour of Spain you will stay in our private and secluded villa Casa de Rihlaa. The villa boasts a large secluded swimming pool which is far from prying eyes. In addition to this it sleeps 16 and has an on site BBQ for those warm summer nights, a Tennis Court, a basketball net, amazing views of the Sierra Nevada Mountains as well as beautiful gardens and a courtyard if you just want to just relax and read a book.

If you still haven’t decided whether this tour is for you please watch the below feedback video which will give you an indication of what to expect on what others have described as a life changing experience.

Due to the new policy implemented by the Board of The Alhambra, which restricts the number of entrances, it is not possible to guarantee the visit inside the monument

Upon your arrival at Malaga airport we will transfer straight to Cordoba, the legendary Muslim city that was the Capital of al Andalus (approximately 2 hour drive). Upon arrival we will check into the hotel. There will then be time to freshen up before a short briefing followed by a short evening tour in the city (evening tour to be confirmed).

After breakfast we will take a guided tour of Cordoba Mosque, one of the most important and largest Mosque in its time. After taking lunch we take a walk through the old Jewish quarter and then across the old Roman bridge for a visit to a fantastic interactive Museum on Islamic Spain (approximately 4-5 hours). In the evening we will be visiting local Spanish Muslims on their farm in Almodovar for dinner (to be confirmed).

After breakfast we will leave for Seville stopping on the way at the archaeological site of Madinat al Zahra. The city built by the Caliph Abdul Rahman III. Here we see the Palace ruins and take a visit to the new exhibitions and museum (approximately 2.5 hours). We will then continue to Seville (approximately 2 hours drive). Upon arrival we will take a guided visit to Seville’s historic center which will include the Royal palaces and gardens built for a Christian king in Islamic Architecture and its Giralda Tower, once the biggest Minaret in the world (approximately 2 hours). It is said the Muezzin used to ride up on a horse to call the Azan. There will then be free time for shopping and to explore the city. In the evening we will make our way to Granada, the last Muslim Kingdom which held out for 250 years before the inevitable fall in 1492 (approximately 3 hours drive). Upon arrival we will check into the hotel for free time.

After breakfast we will make our way to the Alhambra, usually the highlight of the tour for many. Nominated a wonder of the world the visit to the Palaces, gardens and fort will leave you breathless (approximately 3-4 hours). After this you will have free time for the rest of the day to do some shopping and explore the Albaycin.

After breakfast there will be free time before we make our way up to the new Mosque for Jummah. We will then depart for the Alpujjara along the route of Nasrids. On the way we will stop at the old Muslim bridge and the Muslim fort/castle which is the location of one of the last stands made by the Muslims of Alpujjara. We will have a chance to interact with the local Muslim community while having dinner at a Muslim restaurant run by Spanish Muslim revert (approximately 4-5 hours). We will then return back to Granada.

After breakfast we will head to Malaga airport for final farewells. 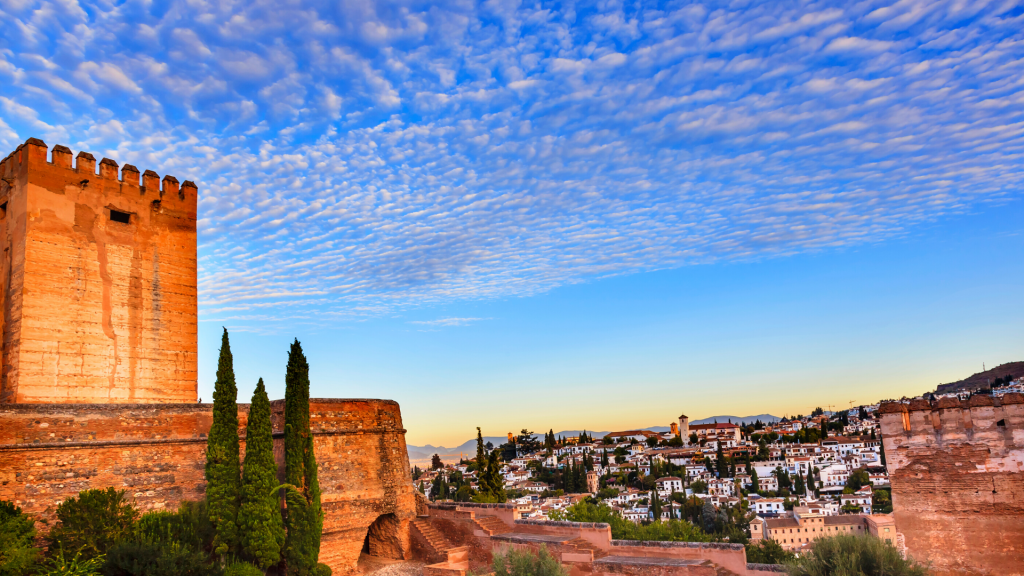 From£745
0
6 travellers are considering this tour right now!