(Women Only) Rise of the Ottomans: in the Footsteps of Ertugrul

When you book with an account, you will be able to track your payment status, track the confirmation and you can also rate the tour after you finished the tour.
Sign Up
6281

Take a journey into the legendary history of the Ottomans in the footsteps of the esteemed Ertugrul Gazi! A brave warrior & leader who was the father of Osman I, the founder of the Ottoman Empire.

The Ottomans created the greatest and most powerful State in Turkish history. In the reign of Murat III (1574- 1595) the Ottoman Empire extended over an area of some 20 million sq km. in three continents. The origins of the Ottomans go back to one of the principalities founded after the destruction of the Seljuk State by the Mongols. This principality had been established by the Kayi tribe, a member of the Oğhuz confederation of Turkish tribes.

The Ottoman principality lay in the district of Soğut and Bilecik in western Anatolia and was first ruled by Ertuğrul Gazi. The latter’s son Osman (from whom the name Ottoman is derived) extended his frontiers to the sea of Marmara in the west and the Black Sea in the north. Then under Orhan Gazi, the whole triangle bounded by the Aegean, the sea of Marmara and the Black Sea fell to the Ottomans, who also crossed over into Europe. It was at this time that the Byzantines lost their important fortresses at İzmit and İznik. In the east, the Ottomans made themselves masters of Ankara, thus taking the first step towards the reunification of Anatolia.

Then 1354 saw another turning point in Turkish history, when Turks crossed the Dardanelles, set foot in Europe and established themselves in Gelibolu (Gallipoli). Sultan Murat I threw himself heart and soul into the European venture, and between 1354 and 1389 the Ottomans advanced from Gelibolu to Kosovo (now in Yugoslavia) and became the paramount power in the Balkans. Crusading armies took the field against the Ottomans but were defeated one by one. Then under Sultan Yıldırım Bayezıt (the Thunderbolt) the Ottomans threw their entire force into Asia.

Join Halal Getaways, proud parent company of Andalucian Routes, who have been providing historic journeys & experiences for over 18 years into the depths of the Rise of the Ottomans, in the Footsteps of Ertugrul.

Welcome to Istanbul… a city straddling 2 continents that has been a melting pot for different people and cultures throughout history. Free and easy. Over night.

7.30 – Breakfast at leisure
09.00 – After breakfast there will be a briefing & presentation at the hotel:
– Introductions
– Program
– Itinerary
– Intro to early history
11.30 – Checkout from hotel – We will start the tour with visits to Sahabe Graves who died in front of the city walls of Konstantiniyye in 7th C.including one of the most important points of Istanbul, the tomb and mosque of Abu Ayyub al Ansari who accommodated Prophet Mohammed (SAW) in Medina. Abu Ayyub died in Istanbul during the First Arab Siege of Constantinople. We will then proceed to the Arab Mosque which was built during the Arab Siege of Constantinople in 717–18 by the Umayyad prince and general Maslama ibn Abd alMalik. After a lunch break we will be passing through the Golden Horn and the Bosphorus Bridge crossing from Europe to Asia while witnessing many highlights of this unique city which served as an imperial capital for almost 16 Centuries during Roman, Byzantine and Ottomans periods.

Nicea (Iznik) – After approximately 2 hours drive, we will arrive in Nicea, captured by Orhan I in 1331 and became the capital of expanding Ottomans for a short period. Nicea is where the Roman Catholic religion was born. Overnight in Nicea (1 Night)

City Walls and Gates, Hagia Sophia Museum, ancient tile workshops, the Green Mosque and soup kitchen will
be the highlights of the day…

After the tour, we drive to Sogut (1hr 30mins) Ertugrul Ghazi had established a principality centred at
Sögüt. With Sögüt as their base, Osman and the Muslim frontier warriors (Ghazis) under his command waged a slow and
stubborn conflict against the Byzantines, who sought to defend their territories in the hinterland of the Asiatic shore opposite Constantinople (now Istanbul). Osman gradually extended his control over several former Byzantine fortresses, including Yenişehir, which provided the Ottomans with a strong base to lay siege to Bursa and Nicaea (now İznik), in northwestern Anatolia. Osman was succeded by his son Orhan, who captured Bursa on April 6, 1326. Ottoman tradition holds that Osman died just after the capture of Bursa, but some scholars have argued that his death should be placed in 1324, the year of Orhan’s accession..

In Sogut we will visit the tomb of Ertugrul Ghazi. Also buried here is his wife Halime Khatun and number of Ertugruls Alps and family members. You will have the oppertunity to dress up as an Alp or a Khatun and buy souvenirs etc. We will then make our way to Ertugrul Ghazi mosque. A masjid in a tent he set up along with a well, where the masjid was befittingly known among locals as the “masjid with a well. The well is still there. Leaving Sogut behind we will journey to Bursa (2hrs) the first capital of the Ottomans. The great Byzantine city fell to the Orhan Ghazi, the son of Osman, in 1326 after 6 year siege. According to some sources Osman, the founder of the Ottoman dynasty, died of natural causes just before the fall of the city, while others suggest that he lived long enough to hear about the victory on his death-bed and was buried in Bursa afterwards. Overnight Bursa (2 nights)

We will start to discover the beautiful and historic city of Bursa. First we will make our way to the top of the city to Bursa Castle & the tombs of Osman and his son Orhan Ghazi and take in some of the most amazing views of the city and surrounding area. Then we will make our way to the Great Mosque which was built at the end of 14th C and has impressive examples of Islamic calligraphy. The Koza Han – Bursa’s Silk Market is the next point to visit. Then on to the Green Mosque and Green Tomb all being the highlights of the day from Ottoman Era. We will then drive to Cumalikizik which was founded as a Wakf village and a protected architectural structures of the early Ottoman period still intact and preserved in time. Cumalikizik was named because people gathered there on Fridays for Juma prayer. Return to Hotel and free and easy Overnight Bursa.

After taking an early breakfast we will drive to Camica Mosque. We will make our first stop at the new and very impressive Camica Mosque. Travel to Istanbul (check time) & free time in Istanbul to explore.

07.00 Breakfast
09.00 After a short briefing at the hotel, drive to Istanbul to discover the sites of the period between the conquest and of the fall of the Ottoman Empire. We will start with Panorama 1453 Museum, unique with 3D vision of the conquest on its dome…Bosphurus cruise will be followed after the Panaroma Museum.

The next stop is Topkapi Palace (including The Holy Relics) which is an incomparably rich treasure-chest, brimming with items of historical importance. We will proceed to Haghia Sophia; undoubtedly one of the greatest architectural creations in the World
used as a mosque during Ottomans and serving as a museum today. After a short walk we will reach to fountain of Wilhelm II. we will proceed to the Blue Mosque; across from St. Sophia built in the 16th century by the architect Mehmet and known as the Blue Mosque because of its magnificent interior decoration with blue Iznik tiles. Our last visit will be to the Grand Bazaar which is the oldest and the largest covered market place in the World with nearly 4.000 shops full of rich collections of carpets, jewellery, leather, and souvenirs. Return to hotel. Reflections of the journey over dinner Overnight in Istanbul fee and easy

07.00 Breakfast
Departures will be organised accordingly. Please provide your flight information asap in order to coordinate your transfers.

N.B. ITINERARY IS TO BE USED AS A GUIDE. THE ORDER AND SEQUENCE OF EVENTS AND VISITS MAY CHANGE. 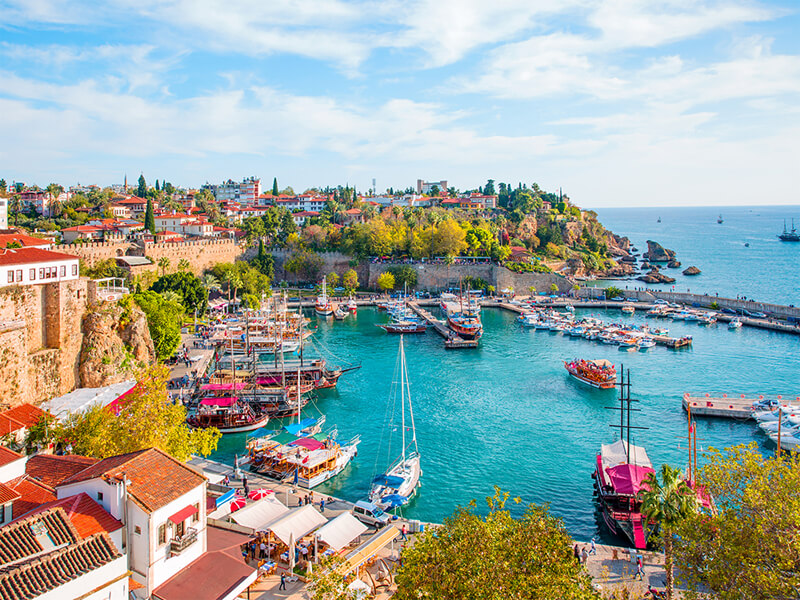 From£800
0
5 travellers are considering this tour right now!